A Look at the Da Vinci Code Film

during Mass in Orleans, France on 11/11/01. About the date, Veterans day and this is a war

up to the 2 witnesses who are mentioned in the 11th chapter of the BOOK OF REVELATION .

During Mass Jesus said; "they, (the Vatican), will not sweep this under the rug", this is in

reference to the story about Mary Magdalene.

Now for the 2 questions;

1) About when he reveals himself.

2) What will he do, while the film portrayed a woman the question was in the masculine.

So lets look at the first one, just as before when Jesus came He was not recognized even

though Herald had many infant males killed, and the Wise men came. Though there were some

who knew who He was. Now as before there are prophecies that he has and will continue to

fulfill from his birth to things about his life and his death. Also like before he would explain it to

those who were interested. The Vatican knew when to expect this but not how it would come

about. That year was 1999, there were more than one respected Prophets, who told Pope

John Paul II this. Like Sr. Lucia from FATIMA and here is the letter I hand delivered to her

once a year during his Papacy. Here is another prophecy about 1999 from a man who's name

is Michel of Our Lady, Michel de Nostradamus;

The year 1999 and seven months

from the sky shall come the great King [deffraieur]

to bring back the great King d'Angolmois

Before and after Mars reigns by good fortune.

Not only was the 1999 part of this prophecy fulfilled the Vatican was also contacted on 12/24/99,

this letter got my Pastor a ticket to Rome in less than 2 weeks. Then representatives from the

Vatican came to my Parish for Easter to see if I would dance for them again.

If you haven't looked at my layout of

God sows the seeds in the 20th Century, and the days of Noah began,, you can

view the letter from there and get a better picture of all that is going on. So you see, the Vatican wants

in the real story like  Mary Magdalene and the SACRÉ(sacred) CŒUR(heart) Connection.

wise, but reveals to those who fear and humble themselves before Him. As revealed in the chapter

Now for the second question which is what will he do, obviously he will support and defend his

Father's Church, as it was written over 400 years ago;

The "trojan blood" is the hidden blood line of Jesus and Mary Magdalene. She was not pregnant at the

Crucifixion, but after he rose from the dead and before He ascended back to Heaven. And people say

that is not in the Bible about Jesus' bloodline. Just as Jesus had to explain parts of Scripture about

Himself so is it now, from Isaiah;

53:10 Yet it pleased the LORD to bruise him; he hath put [him] to grief: when thou shall make his soul an

offering for sin, he shall see [his] seed, he shall prolong [his] days, and the pleasure of the LORD

shall prosper in his hand.

Also from the Book of Revelation;

12:1 And there appeared a great wonder in heaven; a woman clothed with the sun, and the moon under her feet,

and upon her head a crown of twelve stars: 12:2 And she being with child cried, travailing in birth, and pained to

be delivered.12:3 And there appeared another wonder in heaven; and behold a great red dragon, having seven heads

and ten horns, and seven crowns upon his heads.12:4 And his tail drew the third part of the stars of heaven, and did

cast them to the earth: and the dragon stood before the woman which was ready to be delivered, for to devour her

child as soon as it was born.12:5 And she brought forth a man child, who was to rule all nations with a rod of iron: and

her child was caught up unto God, and [to] his throne.

12:17 And the dragon was wroth with the woman, and went to make war with the remnant of her

the commandments of God, and have the testimony of Jesus Christ. 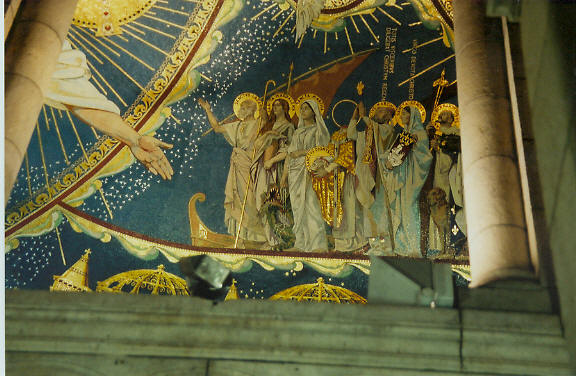 From the Basilica SACRÉ(sacred) CŒUR(heart), in Paris, France. [Mary Magdalene]

Another line in the film is that he may not know this connection as a child, which was the

is like dots on a piece of paper that will not be connected for another 30 years, which

meaning. There were 3 primary events or  you could say lessons and a test at St. Mary's

been suppressed but once again in the Bible we see that there is evidence of a change,

and also of a very powerful female spirit, spoken of in several books of the Old Testament.

1.20 Wisdom cries without; she utters her voice in the streets: 1:21 She cries in the chief place of concourse,

in the openings of the gates: in the city she utters her words, saying, 1:22 How long, ye simple ones, will ye

love simplicity? and the scorners delight in their scorning, and fools hate knowledge? 1:23 Turn you at my reproof:

behold, I will pour out my spirit unto you, I will make known my words unto you.

changes the meaning and shows the arrogance of man;

31:22 How long will you continue to stray, rebellious daughter? [this is referencing the nation of Israel]

for the LORD hath created a new thing in the earth, the woman must encompass a man, with devotion.

In the footnotes of the New American Bible, the official Catholic Bible it states that the words

"with devotion" were added so the verse would "make sense". This not only completely changes

the meaning but is arrogance and heresy, for we are not to adore humans but God alone.

Here is a chapter I have written on the subject of the Holy Spirit with justification in the Bible;

The Holy Spirit, Shekina, the Divine Feminine in Sacred Scripture.

As far as the Catholic Church goes, sure the Hierarchy want this to go away, for they love power.

But all the other "Christian" denominations are similar, everyone one wants it their own way and not

God's way. Some of the supposed "historical facts" about the Church are rubbish. From the day

Jesus came to the earth or as the Bible says and the Word became flesh and dwelt among us,

some Humans knew He was the Son of God.  But this is also prophecy being fulfilled about the

attacks on the Church. The story of Constantine is marginal at best. While some people who call

hate change and CHANGE is what is coming, like it or not. This prophecy will be fulfilled in this

45:23 I have sworn by myself, the word is gone out of my mouth [in] righteousness, and shall not return,

That unto me every knee shall bow, every tongue shall swear.

Which means every knee shall bend to Jesus, the Bread of Life, as in before the Eucharist, and

obey his simple commands, to love one another and the Most Holy Trinity first and foremost and

to honor His mother as Queen of Heaven and earth.

Also Mary Magdalene's tomb, supposed anyway is also known in a small town in Provence in

Also the story was about the "last in the line", left which is not true there are many, but I am the last

male the 7th and the rest will be women. Also while Opus Dei was not a good choice

to portray corruption in the Church, there certainly has been plenty over the years. Like the sex

Vatican, remember the banking scandal at that time. Also he was the only Pope of the 260+ to

be cremated. There were prophecies about the murder and his short Papacy to.

being fulfilled; THE GREATEST SOLDIER . He stated that they, the Church hierarchy, will

not sweep this under the rug. What has happened since? The sex scandal revealed some of

the worst sins of the leadership, the lies and covering up the truth at all costs. Then the DaVinci

you earlier in this chapter. But the bottom line doesn't change which is to Love God 1st and

foremost in your life; Life and the Greatest Love Affair. So there are a few thoughts

on the subject of the movie, I never read the book, I like non fiction. This is not the end of the

story for it will continue to unfold, no matter what any group wants.

Peace be with you.