and the Basilica SACRÉ CŒUR,

inside one of the greatest churches in the world, the Basilica SACRÉ CŒUR, in Paris, France. 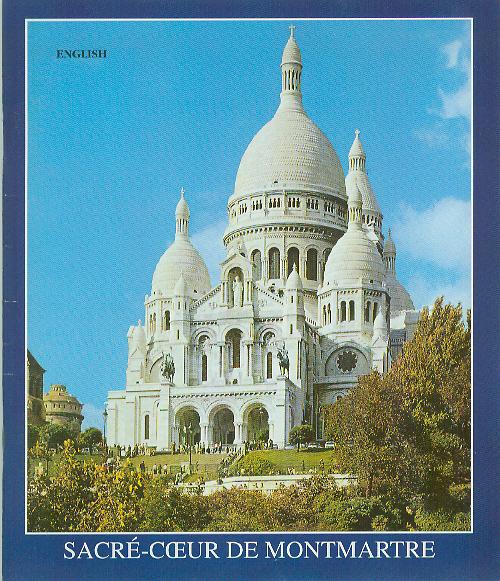 The phrase "de montmartre" means "on [the] mount [of the] martyr. Which will all tie in to the

story as it unfolds through history, the Bible, great works of art, the book Les Propheties, and

Miracles from around the World. Here is a picture of the Large mosaic below are from inside

the Basilica SACRÉ CŒUR and located above the Altar. We'll take a closer look at the

mosaic farther down. I would read this chapter before following the other links in this chapter. 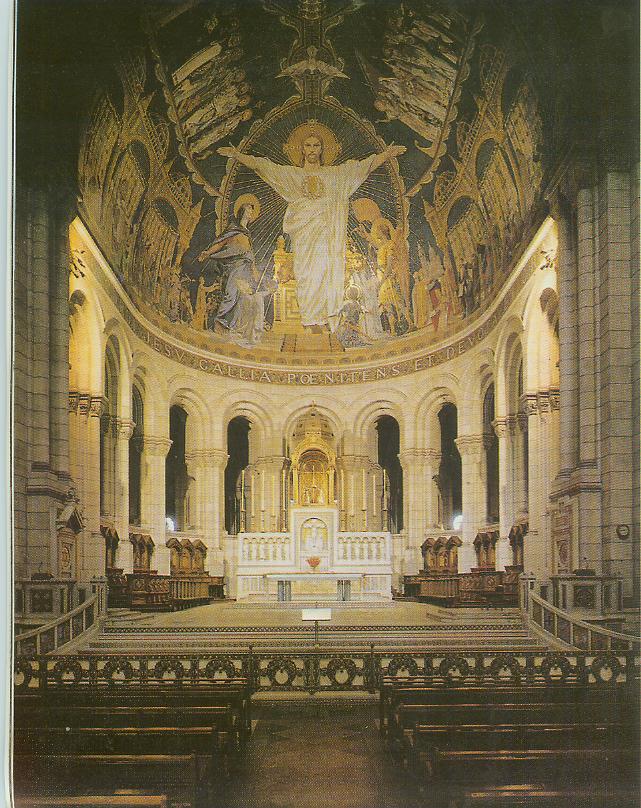 This area will be enlarged below.

with the story about hidden meanings within Da Vinci's painting of the last supper. Mary

Magdalene was not at the table with Jesus, she was with the Virgin Mary and other holy woman

in another room on the same floor as the room where the Last Supper  took place. There are

plenty of paintings which do allude to Mary Magdalene and Holy Royal Blood Line. Also in the

Book of Revelation and in Isaiah it is mentioned. I have told this story in part before in other chapters,

and I believe Jesus died a Virgin. As He told me Thanksgiving evening(1995) which was the first of

only 5 times the He has directly spoken, "My greatest hardship was that I could not have a family as

a man." This was in the beginning of what I call my Graduate work. I put the pen down because it was

a bit much to deal with and started to read the Bible and pray daily. The long version is in this chapter;

RETURN TO MONTANA .  Though this answered what was said in FOURTH GRADE  . The whole

story from my childhood to 1999 can be found in this sub section The Education . The most

dramatic talk with Jesus was at Mass in Orleans, France on 11/11/01. Where He said they, the Vatican,

"will not sweep this under the rug". THE GREATEST SOLDIER .  Now with over 40 million

copies of DV Code sold and the movie coming out, anonymity is fading away. Though people will

like the fiction because they can ignore it, but what is coming is not going away. Which is laid out in

this chapter  God sows the seeds in the 20th Century, and the days of Noah began.

Here Is a copy of an explanation I gave to Sr. Lucia from FATIMA and here is the letter I hand delivered

Now lets take a closer look at that mosaic below; 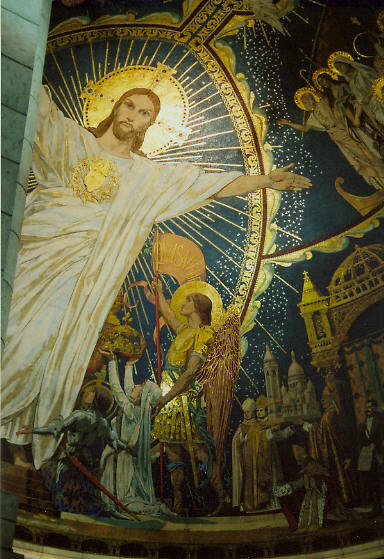 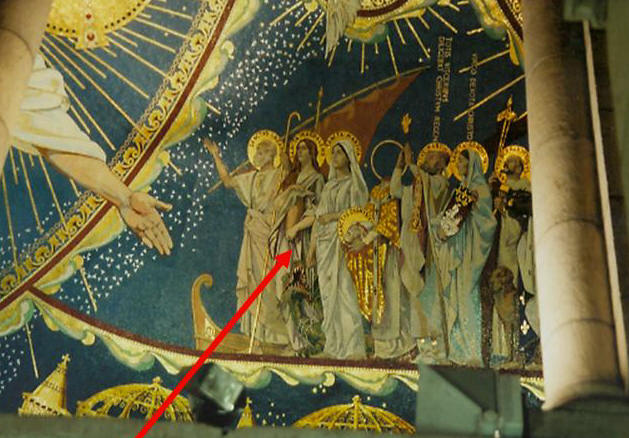 The arrow is pointing to a large jar which Mary Magdalene is holding over her womb.

Notice the serpent at her feet trying to get at the jar, now lets look at a verse from Revelation;

12:17 And the dragon was wroth with the woman, and went to make war with the remnant of her seed,

which keep the commandments of God, and have the testimony of Jesus Christ.

at St. Maries de la Mir and is where she is buried in St. Maximin in the Basilica Sainte-Marie-Madeleine. 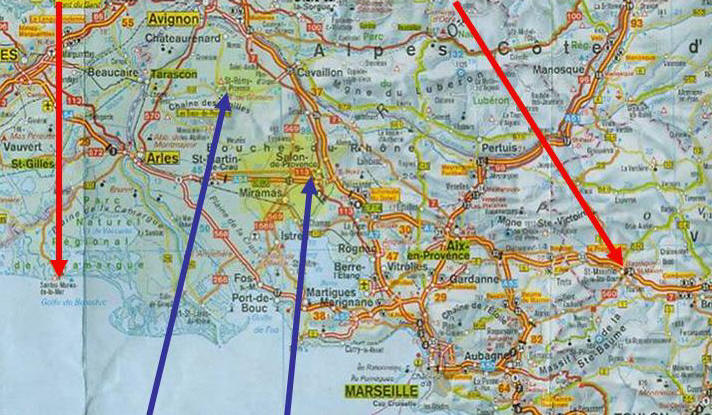 St. Remy is the birthplace of Michel de Nostradamus and Salon is where he wrote his book, Les Propheties,

and where he is buried in the Catholic church St. Laurent. Of course Michel de Nostradame means Michael

of Our Lady. His first family died of the Plague.  The first born from his 2nd wife was a daughter and in his will

is the name of the Church in Mary Magdalene's honor and where she is buried. As far as distance goes from St. 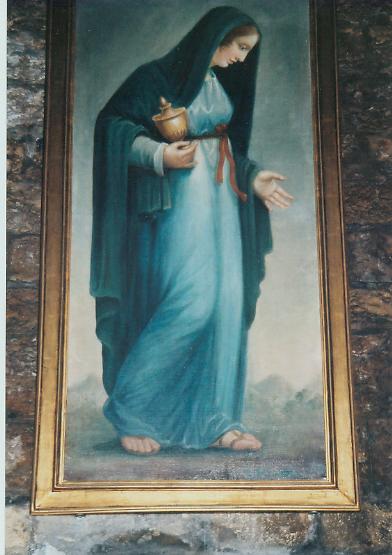 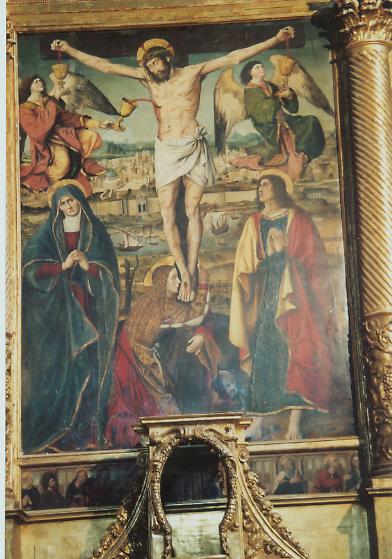 53:7 He was oppressed, and he was afflicted, yet he opened not his mouth: he is

brought as a lamb to the slaughter, and as a sheep before her shearers is dumb,

so he opened not his mouth.

53:8 He was taken from prison and from judgment: and who shall declare his generation?

for he was cut off out of the land of the living: for the transgression of my people was he stricken.

53:9 And he made his grave with the wicked, and with the rich in his death; because he

had done no violence, neither was any deceit in his mouth.

53:10 Yet it pleased the LORD to bruise him; he hath put him to grief: when thou shall

make his soul an offering for sin, he shall see his seed, he shall prolong his days,

and the pleasure of the LORD shall prosper in his hand.

In the Catholic Bible 53.10 is the same up to the word sin then it is;

"He shall see His descendants in a long life and the will of the Lord shall be accomplished through him."