The bonfire was lit during a service at Beskid Zywiecki, close to John Paul's birthplace at Katowice,

southern Poland, on April 2 - the second anniversary of his death.  News article is below. 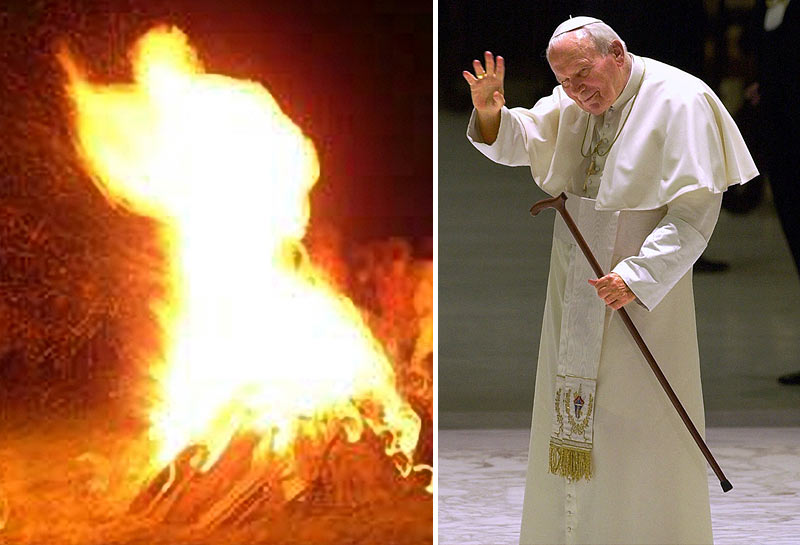 As I stated earlier about the death of John Paul II, he was a marker for the end of the age as foretold

by Conchita in the early 1960's during the GARABANDAL Apparitions. The 2 is very important as

the BOOK OF REVELATION ;

2:26 And he that overcometh, and keepeth my works unto the end,

to him will I give power over the nations:

2:27 And he shall rule them with a rod of iron; as the vessels

of a potter shall they be broken to shivers: even as I received

Parts of this prophecy are also from the 2nd Psalm which I'll discuss later.

We have entered into the time the trumpets, with Christina Galhager also this year being told that

we have entered into the time of the Trumpets. From her July 2007 messages;

Next I saw seven trumpets being given to the Angels who stand in the presence of God. Another angel,

who had a golden censer,’ came and stood at the altar,’ A large quantity of incense was given to him to

offer with the prayers of all the saints at the golden altar that stood in front of the throne; and so from the

angel’s hand the smoke of incense went up in the Presence of God and with it the prayers of the saints.

Then the angels took the censer and filled it with the fire from the altar, which he then threw down on to

the earth; immediately there came peals of thunder and flashes of lightning, and the earth shook.

I have come to set the earth on fire, and how I wish it were already blazing.

Also from the book of Revelation 8.7;

The first angel sounded, and there followed hail and fire mingled with blood, and they were cast upon

From the Epistle Nostradamus to King Henry II;

Then there will issue from the stock which had remained barren for so long,

proceeding from the 50th degree, one who will renew the whole Christian Church.

Here are the stats on the birth of John Paul II, notice he was born just 7 minutes or about 7 miles

the apostasy in full bloom. It takes a long time to turn things around and they have a long ways to go. He

by anchoring the Church on the twin pillars, the greater pillar being the most Holy Eucharist and the smaller

pillar being the Blessed Virgin Mary.

The great Polish Pope was and still is a sign of the times.

Burned into the memory: The image that appeared in the bonfire, Tending his flock:

travelled to Poland after hearing an onlooker had photographed the image.

Father Cielecki said he was convinced the picture showed the former pontiff.

"You can see the image of a person in the flames and I think it is the servant of God,

religious websites, some of which crashed as thousands logged on to see for themselves

the eerie figure formed by the flames.

The bonfire was lit during a service at Beskid Zywiecki, close to John Paul's birthplace at Katowice,

southern Poland, on April 2 - the second anniversary of his death.

Hundreds had attended the ceremony. Gregorz Lukasik, the Polish man who took the photographs, said:

"It was only afterwards when I got home and looked at the pictures that I realised I had something.

"I showed them to my brother and sister and they, like me, were convinced the flames had formed the image

many pilgrimages during his life and he was still making them in death."

Copy and paste this URL to view the article;