Yeshua tells a Priest he is damned 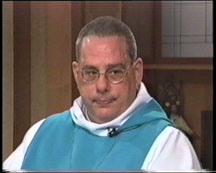 Fr Steven Scheier was ordained in 1973.  Unfortunately he was more concerned about what other priests thought of him than about being a good priest for Jesus.  His priesthood was not in the service of Jesus but to win people’s admiration. Deep down he knew he was not doing what he should be, that he was not the priest he should be.  He hid that to the point that people thought he was a good priest.

On October 18, 1985, Fr Steven was traveling from Wichita to his parish (Parish of the Sacred Heart) in Fredonia, Kansas, 86 miles away. The highway does not have any shoulders, it is heavily traveled by semis, pickups and vans.  That morning he had gone to Wichita to meet a priest and was returning that afternoon.  He was involved in a terrible accident: a head-on collision with a pickup truck and with God. Three people were in the pickup. No one was killed.  Fr Scheier was thrown from his vehicle.  His entire scalp was taken off on the right side. The doctors told him afterwards the right side of his brain was partially sheered off and many cells were crushed. He was unconscious at the scene. Behind him in the ambulance on the way to the hospital was a nurse, who later mentioned she tried to help him with the Hail Mary but didn’t know it but he was saying the Hail Mary over and over by himself.  He was taken to a small hospital in Eureka Kansas.  He had suffered a broken neck, a C2, the second cervical vertebra was broken, the hangman’s break.  Had his head been turned either way at the scene of the accident he would have asphyxiated. The doctor said there wasn’t much he could do and sewed his scalp back on and called for the lifewatch helicopter in Wichita from Lesley Hospital and they brought him to Wichita. He did not know he was being transported because he was unconscious.  One of his parishioners who happened to be in the hospital was told he was being given a 15% chance to live.  Many people of different Christian faiths prayed for him.  He said God hears everyone’s prayer and that’s why he’s still here today.  He had no surgery. The accident happened in October and on 2nd Dec he was released from hospital and still had the halo, as he called it, a support around his head.  He recuperated at home until they could take the halo off, in April.  He returned to his parish in May.

One day when saying Mass, the Gospel was today’s Gospel about the fig tree.  When reading it in the Church, the page became illuminated, enlarged and came off the lectionary towards him.  He finished Mass as best he could and back at the rectory/presbytery remembered a conversation that had taken place shortly after the accident.

In that conversation Fr Scheier found himself standing before the judgment of Jesus. He doesn’t know how long it lasted.  He says the Lord took him through his entire life, and showed him how he had failed in his priestly service.  Fr Scheier said “yes” to everything Jesus said about his life.  Before the accident Fr Scheier had planned that when he would go before the judgment seat of Jesus he would say he was pushed on any day he sinned and couldn’t do anything else.  He had a number of excuses all ready.  He used to confession regularly before the accident but not appropriately i.e. he was not allowing the sacrament to change his life.  He did not have a purpose of amendment.  After the accident he wondered how many of his confessions were valid because he had no purpose of amendment. Before the accident he was thinking there would be time to convert but during this judgment scene Jesus taught him there is no time. Now before Jesus he was talking to Truth and when you are talking to Truth you can’t give excuses.  At the end of his judgment his sentence from Jesus was hell.  Fr Scheier said “yes” as that was the only logical thing he deserved.  At that moment, however, he heard a woman say, “Son, will you please spare his life and his eternal soul?” The Lord replied, “Mother, he’s been a priest for twelve years for himself and not for me, let him reap the punishment he deserves.”  “But Son,” she said, “if we give him special graces and strengths then let’s see if he bears fruit; if not, your will be done.” There was very short pause, after which Jesus said, “Mother, he’s yours.”

Ever since then he has been hers. He didn’t have a special relationship with her before the accident but since then she has become everything to him. At the foot of the cross Jesus looked on her and made her mother of the whole Church.  Fr Scheier says she takes that very literally and seriously. Fr Scheier experienced Jesus’ mercy but Mary was the one who interceded for him.  He has learned this beautiful truth, no one of the Blessed Trinity can say “no” to Our Lady.  It is impossible.  They will not say “no” to her.  He says “Isn’t she someone you want on your side?”

We believe in Jesus, Our Lady and the saints in two ways, with the head or the heart.  Fr Scheier believed with his head and knew nothing with his heart.  He believed the angels and saints but they were make-believe friends and were not real. After the accident he became aware that they are very real, that we have only one home and its not here. Fr Scheier says a lot of our priorities are mixed up.  His priorities were mixed up, his priority should have been to save his soul and save other souls. If he had died his parishioners would not have thought that he would have gone to hell.  Jesus doesn’t take a popularity poll, Jesus is the only one that matters when it comes to what others think about us because we are alone before Jesus in judgment.  We cannot say somebody made me sin.  Jesus knows the truth.

Fr Scheier says during his first twelve years after ordination he was not being a priest for Jesus. Instead of suffering for Jesus he was a priest for himself.  He always ran from the cross.  If we run from the cross there is a bigger one awaiting us.  He says he was a coward during those twelve years.  His mission now is to let people know that Jesus’ love outweighs justice, that hell exists and that we are liable to hell and also that Jesus’ Divine Mercy exists.  I conclude with some of the words of the parable in our Gospel today which has become so meaningful to Fr Scheier,

“Look here, for three years now I have been coming to look for fruit on this fig tree and finding none. Cut it down: why should it be taking up the ground?”  “Sir,” the man replied, “leave it one more year and give me time to dig round it and manure it: it may bear fruit next year; if not, then you can cut it down.”

This homily was delivered when I was engaged in parish ministry in Ireland before joining the faculty of Mount St. Mary’s Seminary, Emmitsburg, Maryland.