A few thoughts on the Documentary

the internet. First lets look at the issues; Global warming and Pollution. Then I'll

finish with an answer to the question put forth by Al Gore in the documentary;

Has been going on for thousands of years ever since the last ice age. His claims as

to the rise in sea levels have been challenged by some in the scientific community,

saying they will be a fraction of his predictions. Most would agree that the earth is

continuing to warm up. The causes are debated and are not agreed upon. The overt

little while. The main cause of the warming in the film is pinned to Pollution which I'll

speak to next, and it is a serious problem. I thought the overall warming trend from the

last ice age needs to be addressed. Also a topic of interest for a more complete

picture would be; What caused the last ice age? There are ancient maps of the islands

that make up Antarctica so it was navigated once upon a time. Also the role of the sun

has not been taken into account. Solar activity is the driving force behind the temperature

on Earth. Here is just one of many articles on the subject; article on Global Warming.

This is a picture of the north pole of Mars which the scientists say is also melting. Because

of greenhouse gases on earth, unlikely. Here is another article on the isssue.

effect on our weather. When I was young a river in Ohio caught fire because the pollution

was so bad. Since we are dealing with CO2 mainly in the film and airborne pollutants in

general I'll stick to them. The problem of acid rain is very real and causing a lot of

problems in our forests and drinking water. My position is to reduce pollution as much as

possible and we have a long way to go with plenty of room for improvement. We must act

now not later. But how much is pollution effecting Global warming and our weather that is

another issue and I believe it is not to the degree portrayed in the film. So the final

First here is a quote from Winston Churchill, used in the film; "The era of procrastination,

of half measures, soothing and baffling expedients and delays is coming to a close.

In its place we are entering a period of consequences. I agree with this very much and

change is coming and there is no avoiding it. There was talk about all the receding

glaciers which has been going on for thousands of years. But what was not mentioned

was that there are a few advancing glaciers, as in growing. Now I recently heard a poor

reason given for this as men try to explain it away. One example is a glacier in Alaska

growing, impossible yet true. Al was talking about the hurricanes of the 2 previous

seasons as a consequence of Global Warming. You can read my take on their

God sows the seeds in the 20th Century, and the days of Noah began.

But lets look at the Doppler image of Wilma, the 7th and last major hurricane to come ashore 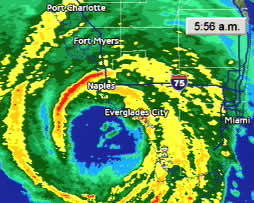 Global warming did not cause the 2 to form in the middle of the Hurricane.

He also said that the next year would be off the chart, well actually it never got

on the chart because none hit the U.S.

Now at one point while surveying damaged areas Al states; " It is like taking

a walk through the Book of Revelation.". He spoke the truth, which I lay out in

the chapter on the 20th cent. linked to above. What does the first trumpet say?

From the  BOOK OF REVELATION ;

8:7 The first angel sounded, and there followed hail and fire mingled with blood, and

hey were cast upon the earth: and the third part of trees was burnt up,

and all green grass was burnt up.

Sure sounds like heat waves and drought to me. Also this was foretold by others

and that Jesus will not take His hand off the weather until the world realizes this.

That will take awhile. We are only in the beginning, and there is much to come,

unfortunately. Far to many think science is their savior and they are in for a rude

awakening. The warming that I am most worried about is from the Wrath of God.

Here are a couple more quotes from the film to end on;

African Proverb; "When you pray move your feet."

Another one was; "If you believe in prayer, pray people find the strength to change.